Donald Trump won the election in a landslide because of bold ideas. His ideas would erase and remove decades of failed policies and corrupt agendas that have plagued this country for too long.

As Trump’s transition team continues to fill his cabinet, more and more attention continues to surround the possible selections for a variety of high-ranking positions and meetings that might help decide these appointments.

On Monday, Trump held a meeting with John Allison, the former CEO of the bank BB&T and of the libertarian think tank the Cato Institute. We have seen several reports indicating that Trump is considering Allison for Treasury secretary.

Why is that important?

On the campaign trail, Trump often questioned the future of the Federal Reserve’s political independence. In line with these comments, Allison wants to abolish Federal Reserve all together and go back to the gold standard.

In fact, Allison takes that rhetoric one step further. While acting as the head of the Cato Institute, Allison published several thesis indicating that the Federal Reserve was obsolete and needed to be abolished as it restricts power from the people and allows billionaire cronies to run banks globally.

“I would get rid of the Federal Reserve because the volatility in the economy is primarily caused by the Fed,” Allison wrote in 2014 for the Cato Journal.

As an alternative, Allison argues that if we allow the market to regulate itself, it would be preferable to the Federal Reserve harming the stability of the financial system.

“When the Fed is radically changing the money supply, distorting interest rates, and over-regulating the financial sector, it makes rational economic calculation difficult,” Allison wrote. “Markets do form bubbles, but the Fed makes them worse.”

The United States never had a persistent, ongoing problem with inflation until the Federal Reserve was created in 1913. This chart alone proves that theory: 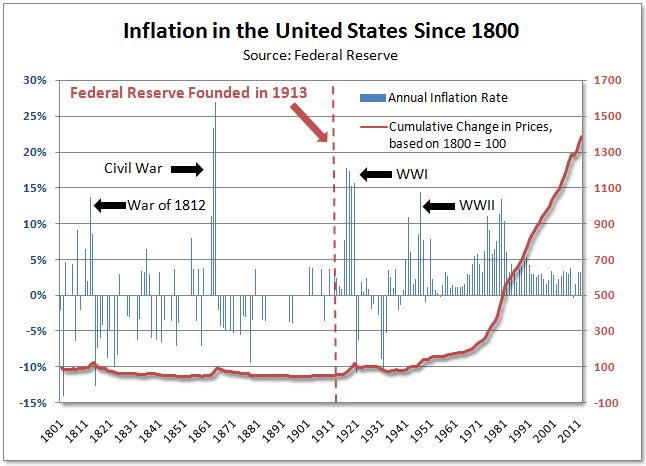 The Federal Reserve systematically penalizes those that try to save their money. Inflation is a tax, and the value of each one of our dollars goes down a little bit more every single day.

Point blank, the Federal reserves needs to be abolished if we are ever going to reduce our national debt, create jobs, and give more power back to the people.

A vast majority of these proposals are directly aligned with Donald Trump’s desire to rollback regulations— including Dodd-Frank — on financial institutions, as well.

It would provide a more stable means for markets as well as allowing the monopolization of banks to be broken down instead of allowing less than ten people to control all of the worlds banks.

Ron Paul is about to get his wish

The Federal Reserve is at the heart of most of the economic woes facing the US. Endless borrowing and money printing will result in massive inflation, and interest rates cannot stay low forever. We could very well see the market collapse again if we do not make drastic changes.

Trump’s meeting is more than notable, it is almost groundbreaking. No president has dared to take power away from the Rothschilds’ and other billionaire elites that control all of the worlds banks.

We could possibly be taking steps to eliminate one of the most corrupt banking schemes to ever take hold in this country.

Should Donald Trump work to abolish the Federal Reserve?