Property Being Seized, Wonder What They Contain?

Property Being Seized, Wonder What They Contain?

This post is what you might call a “Play Along At Home” article. The materials we will look at are as curious as they are disturbing. I am not sure that my interpretation of the clues is correct; that’s why I need your help. So, put on your thinking caps and see if we can crack the code together. After reading the clues, leave your answers in the comments!

As I reported yesterday, there is mounting evidence that the Clintons have at least abetted some friends involved in orphan smuggling and human trafficking. We also know that Bill Clinton flew on the pedophile Jeff Epstein’s private jet, The Lolita Express, and visited Epstein’s private “Pleasure Island” dozens of times–and apparently at least five times without allowing Secret Service agents to accompany him.

It’s the Clintons–are you honestly even surprised?

Because this “game” is about code-breaking, we need to establish some terms up front.

oh god. This e-mail make so much sense now. pic.twitter.com/3oDITm6XqI

According to The Urban Dictionary “pizza” often refers to drugs. Further, “cheese pizza” (or “CP”) is a well known online code word for “child pornography” (or “CP”).

4 – The idea of coded emails may seem far-fetched, but I have shown how Podesta and his circle of colleagues use coded emails, specifically in reference to Antonin Scalia’s mysterious death.

Now let us trace the trail of pizza crumbs, so to speak, that has been unveiled by the Wikileaks releases.

To celebrate all you hot dogs out there. Aaric, you can participate as well!

Subject: RE: Get ready for “Chicago Hot Dog Friday”

I think Obama spent about $65,000 of the tax-payers money flying in pizza/dogs from Chicago for a private party at the White House not long ago, assume we are using the same channels?

RE: Get ready for “Chicago Hot Dog Friday”

A hot dog party? $65,000 flying in pizza and hot dogs from Obama’s old stomping grounds? Using the same channels? A private party? (What party with the President of the United States is not private?) Hinting about “waitresses” with quotation marks? This is clearly double talk.

An email from Doug Band to other Clinton staff titled “pizza.jpg”.

As John [Podesta] said, it doesn’t get any better than this

Band is referring to the photo he attached:

Don’t ask me why, either, but someone entered this photo into an online contest back in July 2011:

Pizza and terrified hot dogs… in bed… under a symbolic painting of death.

An email from Jacob Sullivan to Hillary Clinton, titled, “My whereabouts today”. Sullivan worked under Hillary when she was Secretary of State.

I am out of the office today, en route now to New Haven. I’m giving a talk at the Law School, seeing my old profs and President Levin, and eating some pizza.

Hillary responded a few minutes later, “Have a slice for me!” Why do these people go out of their way to emphasize eating pizza, as if “eating some pizza” is an activity on par with and distinct from giving a lecture and seeing old colleagues.

An email from Herb Sandler, wealthy Democratic supporter in San Francisco, to John Podesta, titled, “Did you leave a handkerchief”.

The realtor found a [black and white square] handkerchief. I think it has a map that seems pizza-related. Is it yours? They can send it if you want. I know you’re busy, so feel free not to respond if it’s not yours or you don’t want it.

How does a handkerchief “have” a map and why, again, is this stuff “pizza-related”? My suspicion is that “handkerchief” is code for a cellphone, a handycam, or maybe an external hard drive for sharing “C.P.” of various ‘flavors’. It’s well worth noting that there is a decades-old, color-coded “handkerchief code” in the gay community. Podesta replied that it was his, but not worth worrying about–as in, just get rid of it?

An email between John Podesta, his brother Tony, and an artist named Marina Abramovic, titled “Dinner”. This one is extremely important, so if you want to know more, read Martin Walsh’s article on what follows here.

I am so looking forward to the Spirit Cooking dinner at my place. Do you think you will be able to let me know if your brother is joining?

All my love, Marina

What is a “Spirit Cooking dinner”?

If “cooking” can refer to satanic art rituals, then other food terms could easily have double meanings as well.

Like I said, if you want to know more about this creepy Abramovic woman, read Walsh’s post.

An email from Peter Mattingly at Georgetown University to his law school colleagues, titled, “Help!”

My parents are visiting this weekend, and I need to sell my enormous collection of beanie babies! I’ve approximately 480 little creatures of joy, and I’m selling each one for $20.00. You must buy all 480, though. It is a collection (not an auction)… They are very respectful and amicable with one another, and they are (for the most part) cat and dog friendly. Some are sassier than others, naturally.

Please let me know! My parents can’t find out. 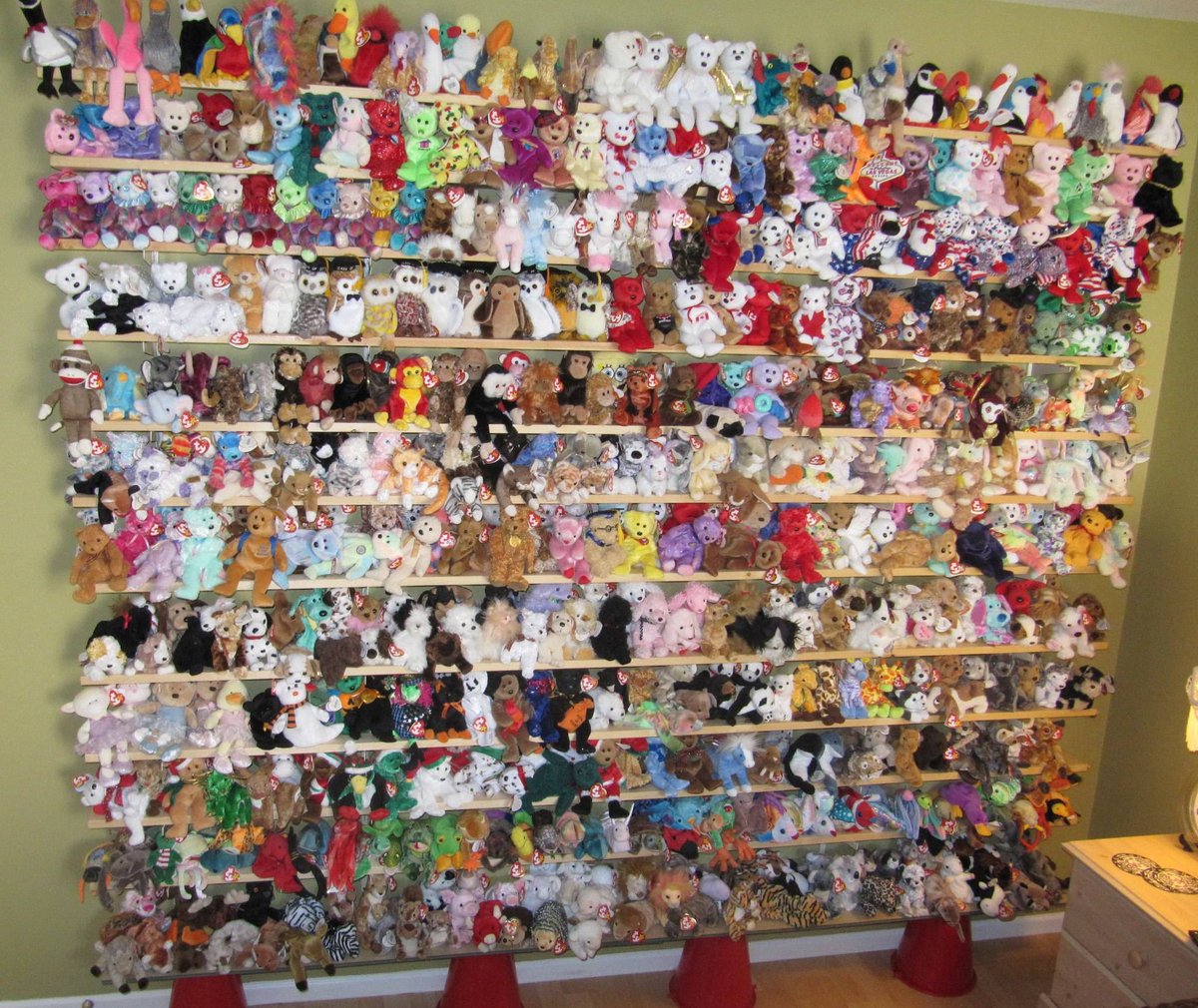 There are 480 Beanie Babies in this photo (yes, someone counted).

Here’s the problem, though: the earliest link to that photo is dated October 24, 2014, but Mattingly wrote his email on July 30, 2015. Clearly, then, he was using a public photo of Beanie Babies to pretend he owned actual Beanie Babies. His email, however, makes no sense if he’s really talking about little plush dolls. Look at how he describes these lifeless toys:

“…little creatures of joy…. They are very respectful and amicable with one another… they are (for the most part) cat and dog friendly. … Some are sassier than others, naturally. … My parents can’t find out.”

Again, I have no certain answers, but here’s what I’ve gathered:

“My parents” probably refers to some outsider or law enforcement personnel; beanie babies are probably videos of children in certain… taboo or “sassy” situations. 480 may refer to the number of videos for sale, or to the pixel quality of the videos (480p, like on YouTube), or to the number of GB in the file for sale. It is almost most likely that $20.00 is code for $2000. Lastly, “cat and dog” might refer to gay and straight, lesbian and homosexual, or just female and male, depending on what’s in the videos.

Even if Mattingly is referring to illegal drugs, it only proves how brazen this circle of people is, and how they use coded emails to communicate.

An email from a T. Stern in the State Department to John Podesta, titled, “man, I miss you.”

The next three months are going to be rougher internally than in Beijing. Between 7th and 1600, no fun. Hope you’re doing ok. I’m dreaming about your hotdog stand in Hawaii…

Stern is expressing intimate “internal” emotions, a sense of boredom, and dreams about John Podesta’s “hot dog stand”. You tell me.

So glad that we got to see both of you after quite a while. It was great to be with Tony so close to his 72nd [birthday].

Attached are pictures that capture some of the spirit of the evening – at a couple of different levels.

That’s Tony Podesta, but where’s the pizza at this pizza party?

That is Ashok Mhabubani with…Pope Francis?! A cutout of Pope Francis? At a Podesta pizza party??

At this point, I need to mention one other possibility: photo stenography.

Steganography is the science of hiding secret message inside another larger and harmless looking message. This is one notch above regular cryptography; which just obscures the original message. Steganography tries to conceal the fact that there is a message in the first place. Stenographic message often appears to be something else than the original (secret) message, like a picture, sound, larger text, etc.

In other words, a secret message (a password, a link, etc.) can be hidden in plain sight. This may well explain why Mhabubani sent such innocuous photos and said they “capture some of the spirit of the evening – at a couple of different levels,” as in, layered under a stenographic photo. And don’t let the description fool you: this technology is commonly available and very easy to use. Even a tech-idiot like John Podesta could use it.

Let me conclude with some information that a colleague sent my way this morning:

I have to relate something about the (disgusting) Spirit Cooking story. It’s not surprising to me that John Podesta’s brother, Tony, forwarded the invitation, and here’s why: when I was lobbying [a Fortune 100 company], the company had Tony Podesta’s firm on retainer. From time to time, I used to hear stories about fundraisers held at his Capitol Hill townhouse…the chief comment voiced by my coworkers was that he had these giant framed photos of male and female genitalia hanging on the walls.

And when Podesta came to our weekly lobbyist meetings, what I remember most is the creepy … aura, I guess you’d call it, that he gave off. Just a weird dude.

Look, that’s not exactly news, but take it for what it’s worth. I happen to believe that the Podesta-Hale-Palmieri exchange about their plans for the Church is on par with the Nazis. This latest twist just reinforces my belief.

The stakes could not be higher, folks. Pray your prayers and cast your votes. America stands at true crossroads.